The Red Kettle was built in the early 1920’s as an ice cream, candy, and soda shop café.  In the late 1940’s it was renamed the Coffee Cup.  After being purchased and remodeled by Jan Boss it reopened as Jan’s Red Kettle in January 1979.  She and her husband Pat owned it until 2002, when it was purchased by Jimmy Campbell. 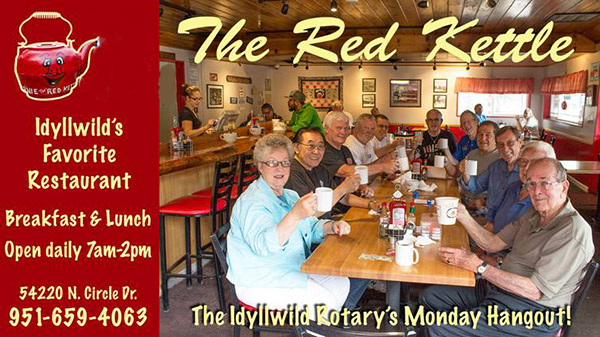 Jimmy sold it shortly thereafter to Joann Canetti, who changed the name to JC’s Red Kettle. In 2006, the Stewart family purchased JC’s Red Kettle, changed the name back to The Red Kettle and operated it until May of 2016.  The Red Kettle is now owned and operated by The Peregrine Falcon, LLC. Being the oldest running café on the hill, the Red Kettle has seen its fair share of famous people over the years; like a regular, John Wayne,  who filmed all over the hill, and Elvis Presley, who made Kid Galahad  right here on the hill.